Why Worship with a Book of Common Prayer? 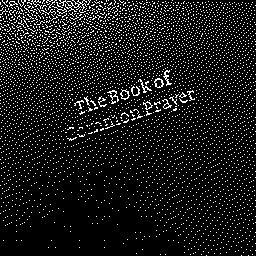 The English Church, her descendants, and her colonial heirs worship with a common book of prayer for a few historical and theological reasons. It might come as a surprise to many North American Christians, but liturgical worship is by far the norm in contemporary Christianity and, prior to the Reformation, was the universal form of worship in the Church. Before the upheaval of the Reformation, East, West, Ethiopian, Syriac, and more all worshiped God using liturgies attributed to the saints and apostles.

So, how did the Church come to worship liturgically in the first place? Jesus is a Palestinian Jew, and his ministry was among the Jewish people. Jewish worship in the temple and the synagogue was liturgic. Throughout the narrative of the Old Testament and the historical record, one sees that Jewish worship had a cycle of Psalms, seasons, and sacred rituals. As the first Christians were Jewish, it is no surprise that Jewish liturgical practice and ritual found its way into Christian worship.1 The Psalms and readings of the synagogue — as seen when Jesus reads from Isaiah in Luke 4:16-20 — were continued by the Church and augmented with the teachings of Jesus and, later, the canon of the New Testament. The sacred rituals of baptism and Eucharist are deeply rooted in Jewish purification washings and post-meal prayers involving a chalice of wine. Over time, services were standardized, as they had been in the Jewish tradition, and regional liturgies formed.

At the earliest stages of his reformation, Martin Luther realized the importance of worshiping God and hearing the Word proclaimed in the common language of the people. As Dr. Luther broke with Rome, he simplified the Roman liturgy, translated it into the vernacular, and increased the congregation’s participation. No longer would those in worship be passive receivers of the liturgy, but the people would be participants with the priest.2 Cranmer and other English reformers took the precedent from Luther and applied it to the English context. The English, too, would have a clear, easy to understand, liturgy for worship and personal devotion.3

Since the early days of Christianity, it was said, “lex orandi, lex credendi” — that what Christians pray leads to what they actually believe. Liturgy’s role in forming the theology of the ordinary Christian is why it has been so important and at times contentious in the history of the Church. The Reformers wanted to ensure prayers, scripture, and worship were in the vernacular because they wanted scripture to form the beliefs of Christians rather than the Magisterium. The counter-Reformers, likewise, would form liturgy to uphold the traditions of the Magisterium against Protestant critique. Liturgy does more than provide us with well-written prayers and an ordo for worship services. Liturgy molds the Church in her image. This power of liturgy is why liturgy is so slow to change and often the first target of theological reformation movements.

J.I. Packer’s lecture, “The Prayer Book Path,”4 is a great example of the power of liturgy to form a person. Over Packer’s eighty plus years with the English liturgy, it formed him and drew him closer to God. The prayers of the English Book of Common Prayer Packer found were set to be prayed by “spiritually alive people”5 who know God and seek to center their life in Christ. For Packer, the common prayers of the English Church formed his belief and daily practice to match what he prayed. I, too, have found this to be the case.

For me, an apology for a Book of Common Prayer is personal and theological. As an English descendant and someone who was raised outside of the Christian Church, I take great solace is praying the prayers of my forefathers. The ancient prayers of the Church give me a place in the Church’s history that I do not have by upbringing. In common prayer, I find a connection to the saints who have gone before me and a real spiritual and cultural home.

Theologically, the common prayer of the English Church does form. To my mind, the Book of Common Prayer and modernized and localized descendants are among the greatest disciple makers that have existed on this earth. Like the creeds, the Prayer Book sets boundaries for devotion, reflection, and belief. The Prayer Book, in its rhythms of daily prayer, collects, psalms, hymns, and feasts sets time to serve our worship of God. In the daily and weekly repetitions of the liturgy, prayers of saints past and the very words of scripture, weave themselves into the fabric of my being.

In times of stress, “Lord, have mercy. Christ, have mercy. Lord, have mercy.” are fresh on my lips. As I stroll down the hall between meetings at work, I am humming “Lamb of God, who takes away the sins of the world.” Each night, we begin our prayers, “O God make speed to save us. O Lord make haste to help us.” and we pray the same prayers said by so many Christian before us. The Psalms, the collects, the simple responses — “and with your spirit” — encircle the very language of my family and me.

Through daily use of the Book of Common Prayer, my family’s words have been transformed to point to and glorify the Living Word. As Packer cites in his lecture6, the Prayer Book expects something of you. It lists prayers for birthdays, because it expects a birthday celebration to worship God ultimately. It lists prayers for births, deaths, harvests, storms, sickness and so much more because it wants us to render all things to Christ for the glory of God the Father. Were it not for the Prayer Book’s guiding hand, so many occasions in the daily life of my family would remain secular. We would miss the joys of a life fully lived with God.

Yes, transformation and discipleship can happen without a written liturgy and shared prayers, but the collected wisdom of generations should not be so easily dismissed. The Book of Common Prayer is the prayers of the saints, the prophets, the apostles, and — most importantly — the Eternal Logos. Standing upon the very words of scripture, the Book of Common Prayer forms Christians because God’s words will not return to him void.7 Praying with the communion of saints united to Christ in baptism and Eucharist can have no other effect than closer union with God.