Law, Gospel, and the Beatitudes 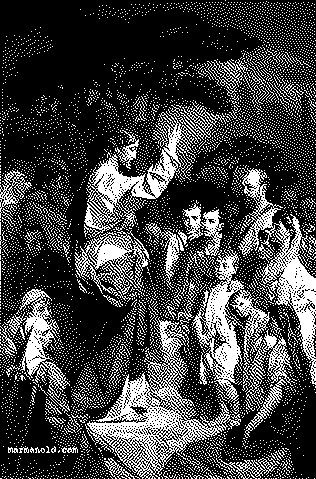 I love the lectionary. Not specifically a particular lectionary. (I’m not going to get into the debates of the one-year traditional lectionary versus the three-year cycle of the 20th century, etc.). But, I love the thematic presentation of Old and New Testament. Where else other than the lectionary are you going to find Jeremiah, David, and Jesus in conversation with each other? Where else can we so clearly see the same spirit and Word at work in Jeremiah and David? Where else can we marvel that the God of the universe listens to mere men and not just listens, but will use and perfect their words to his glory?

That great Anglican divine, Bishop Lancelot Andrewes, defines the faith of the English church as believing:

One canon reduced to writing by God himself, two testaments, three creeds, four general councils, five centuries, and the series of Fathers in that period

Days like today are an exemplary example of the unity of the Bible. How the one Bible across two testaments speaks the same gospel and proclaims the same unfailing love of God. Outside of the main theme of today’s sermon, please do take away an appreciation for our one Bible. The Church binds the Bible in a single codex for a reason. We are meant to read it together. Scripture interprets scripture and all scripture points to Christ who is the fulfillment and truth, the true Word, behind the words.

Blessings and curses, scoffing and delighting, happiness and woe. Today’s readings point us to a reflection on contrast. Contrast is a common theme in scripture and across even the secular stories told by humans. Think back to the many stories of your childhood. How many of the tales told to you by parents and teachers were stories of contrast? Stories showing the outcome of bad choices as compared to good ones?

I think back to a library favorite, Highlights magazine and the characters Goofus and Gallant. Goofus, of course, constantly makes poor decisions and suffers the consequences. Gallant, however, always does the kind and polite thing and his life works out splendidly. Were that life were so simple and straightforward!

Since the Fall, our natural inclination has been to divide in contrast. The creation, made in perfect unity with God was broken by death. Good and evil. Lightness and darkness. Cain against Abel. Contrast. Divisions. Of course, some divisions make complete sense. Christ will divide the goats from the sheep. A rotten apple added to a bushel of good apples will begin to spoil the entire batch. With humans on this side of the Resurrection, however, things aren’t so cut and dry. We’re, after all, simul iustus et peccator (saint and sinner at the same time). How can we look beyond “red team” and “blue team” — our black and white thinking — and instead look at the contrasts within ourselves that point us closer to Christ’s Kingdom?

Cursed is the man who trusts in man and makes flesh his arm, whose heart turns away from the Lord.

Blessed is the man who trusts in the Lord, whose trust is the Lord.

One of Satan’s greatest lies is that of simplicity. If he can convince us that things are simple or black and white, he can remove our dependence from God. He can move us to worship and trust ourselves instead of the Lord.

The Devil wants to take what Jeremiah is saying here and make it a simple contrast. People who go to church and say an occasional prayer are, obviously, trusting in the Lord. Everyone else is cursed. End of story. Nothing to see here. Move on.

But, wait, that is just too simple. The people I know and — by the way, the people Jeremiah is talking about — are way more complicated than that. Prayers were happening around Jeremiah. The Lord’s name was invoked. But, see, that wasn’t the main point. This isn’t about some invisible line between blessing and curse. This isn’t a simple division where you just gotta step enough over the “blessing” line and then you’re done.

Jeremiah is calling us to contrast. In each decision, in each moment are we ultimately trusting in God or trusting in ourselves? Does the most recent bank deposit give us more comfort than the words “remember your baptism?” Do we feel safe because Jesus conquered death and rose again or because of that little red light on the keypad and the 12-gage in the closet?

Again, this isn’t about keeping score and making sure you have enough “blessing points” to be on Team Jesus. Wanting to trust in our own knowledge and not God’s is what got us into this mess. It is the curse. The blessing comes in the contrast when we see where we’ve failed. It’s there that we see what we’ve lost. It’s there that we see what Christ has accomplished for us. It’s in the contrast that we can see how much we need him and can run to him for aid.

Stepping outside of the Devil’s simple division, we free ourselves from either being too bad to matter or too good to be bothered. Each moment, each thought, each decision becomes a chance for us to contrast ourselves against God’s law and holiness. Each moment an opportunity for prayer, forgiveness, and renewed trust in God. Each moment a mini Easter where Jesus rolls away yet another stone from our tombs. In every contrast, a new nook of our lives where Jesus can shine his healing light.

Blessed is the man who walks not in the counsel of the wicked, nor stands in the way of sinners, nor sits in the seat of scoffers; but his delight is in the law of the Lord, and on his law he meditates day and night.

David gets it. This is what we’re talking about. We can sit and judge, scoff at those who are failing. Scoff at the Goofuses in our lives who’ve made poor decisions. Or we can delight at the sweetness of God’s law and the Christ who freely died even for Goofus’ sins.

It’s easy to get into Satan’s plans for simple division. Those people make bad decisions. They are bad. “Team Bad” isn’t us. We don’t need to think about them anymore.

But, again, we’re not actually presented with a simple black and white division. Each of us is both. In our daily lives we follow the “counsel of the wicked” even as we drive ourselves to church. Daily our struggle is against the “rational” simplicity of Post-Enlightenment man and the “irrational,” ancient, and often complicated ways of God’s law.

The “counsel of the wicked” seems so reasonable and straightforward. None of this loving your enemies and blessing those who curse you stuff. Reasonable counsel would tell you to invest 10% of your paycheck, not “waste” it on candles, clergy, music, and the poor.

The law convicts us here. Time and time again we mess up and go the way of the world. At this, the Devil desires us to throw our hands up and embrace his simple lies.

David, however, calls us to meditate on the law. “Yes,” says David, “the law convicts. I know that better than many men. But, I also know he who gives the law. He is love. He is forgiveness.”

Again, in the contrast between God’s law and the “counsel of the wicked” we find the places we’ve yet to freely yield to God. God’s law is an invitation to fully expose ourselves as we truly are. God’s law is the path to the full embrace of the true Lord who runs toward the wicked and not away.

Wow. Do y’all see what Jesus is doing here? He’s taking the words of Jeremiah and David and taking them to the next level. He’s fulfilling that which they were pointing to. He’s proclaiming his upside down kingdom.

Jeremiah and David pointed us to contrast our inner lives against the perfect law of God. Jesus is pointing us to extend that outward into the world around us. We are called to feed the hungry, comfort the sad, include the excluded, and enrich the poor. Those words convict. Those words move us to realize how much we fall short of God’s holiness. At the same time, we realize the second we move someone from hungry to full, we’ve moved them to “team woe.” This is an all-encompassing contrast.

Both rich and poor need Jesus. Both hungry and full need the church. God’s law convicts everyone and everything. Nothing is exempted. Jesus is savior of the entire cosmos.

To use the beatitudes to divide is to fall into Satan’s lie of simplicity. The beatitudes are meant to convict all. They are meant to point all to the one true Bread of Life. Jesus is the one Bread you can eat that will relieve your hunger, but never make you full of his infinite love. Jesus is the only way to be rich beyond measure, but unable to purchase your own island. Jesus permanently wipes away every tear for all eternity when he ushers in his New Creation. Through Jesus alone, are we forever united to him and to each other never to be excluded again.

Life isn’t simple. We fail continually. But, Jesus. Because he did, we — through him — can. The life, death, and resurrection of Jesus makes the bitter law sweet as honey.

Contrast your life against God’s holy law. Receive the blessings of God freely given to all who come to Christ. Turn outward to the world caring for the poor, the hungry, the sad, and the excluded as Jesus commands. But know, our work does not end. We will never outgrow our need for Jesus. The contrast always moves us towards him. “In him we live, and move, and have our being[…]“. Thanks be to God! Amen.