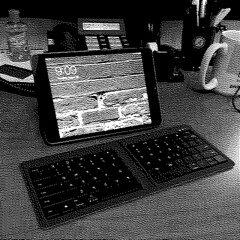 Two years ago I first entered the world of iPad note taking. I was starting my first semester at VDS and had purchased a first generation iPad Air a few months before. My intent was to use my iPad to take notes during lectures and in my many meetings at work. — I was still rocking a giant, heavy HP Elitebook 8760w 17” portable workstation at the office. — I started down the path of pen input, but quickly realized that wasn’t the best way to go. Pen input wasn’t supported well by iOS and wasn’t automatically converted to plain-text like my beloved Newton would. For plain-text note taking, keyboard entry was still the best. I went to Amazon, purchased a bluetooth keyboard, and started carrying my iPad to meetings at work and lectures at school.

This lasted all of three weeks.

First, the keyboard was constantly losing connection with my iPad. This is mucho no bueno when you’re trying to keep pace in Hebrew Bible or documenting a VP’s new direction. Second, iOS keyboard support was rudimentary at best and moving the cursor around was a major pain. All in all, I spent more time fiddling with my iPad keyboard setup than I spent actually taking meaningful and useful notes. I bought a refurbished 11” MacBook Air, sat the iPad next to my reading chair, and didn’t look back.

That is, until I inherited an iPad Mini 4 at work about a month ago.

With the advent of the iPad Pro and two years of iOS keyboard and multitasking improvements, I knew the iPad was more capable for my needs than it had been two years before. When I started, LifeWay issued me a 13” MacBook Air, so portability was hardly a concern, and yet, my MacBook was docked and it would be nice to have something I could quickly schlep off to a meeting. This free iPad was a risk-free chance to try a new workflow. — I’m always looking for ways to streamline my day. — I started researching. 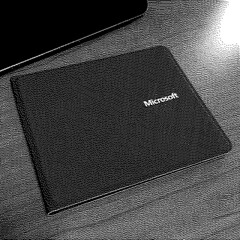 As I started pondering which keyboard I would try with my new iPad, I remembered the little mini TypeCover-like keyboard from Microsoft that I had seen at one of my many wanderings through BestBuy. Before I left HealthTrust/HCA I had spent a year with the wonderful Microsoft Surface Pro 3. The quality of hardware both for the tablet and the TypeCover left a good impression with me. I checked the reviews on Amazon, saw the price, and decided to take a dive. A month later, I’m extremely happy with the direction I went.

The Microsoft Foldable Universal Keyboard (MUK) pairs quickly with my iPad, hasn’t once lost connection, and holds an amazing charge. The build quality is reminiscent of the Surface TypeCover. The keyboard gives a nice magnetic click when you close it and the textured outside feels premium. 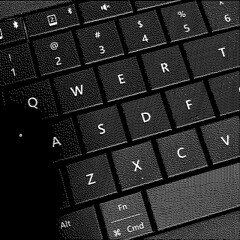 I’m a bit of a keyboard snob using mechanical keyboards from Unicomp at all of my workstations. Though I wouldn’t write a major essay or do hours of software development on my MUK, for taking notes and shooting off quick e-mails the MUK is a dream. — I actually wrote this post majorily on the MUK. — The type feel is near identical to the TypeCover. There is good key travel and the keys feel very solid. It’s more akin to typing on a laptop than a thin portable tablet keyboard. 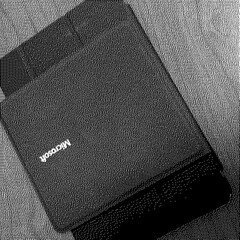 Size-wise the MUK fits perfectly with my iPad Mini. Closed, the MUK is only a centimeter or two longer than the iPad is wide. I can easily carry both with one hand and the textured outside keeps enough friction between devices to prevent slippage going up and down stairs. In my briefcase, the MUK is no bigger than a CD case — Remeber those? — and no thicker than the iPad itself.

Though I thankfully haven’t tested this feature out, the fact that the MUK is also spill resistant gives me confidence to use my MUK in situations where I might think twice about pulling out my MacBook Air or another keyboard. I’m way less nervous about potentially spilling my coffee or soda than I would be otherwise.

The Microsoft Foldable Universal Keyboard is something you should buy. Good type feel & key travel, great build quality, and a nice price.