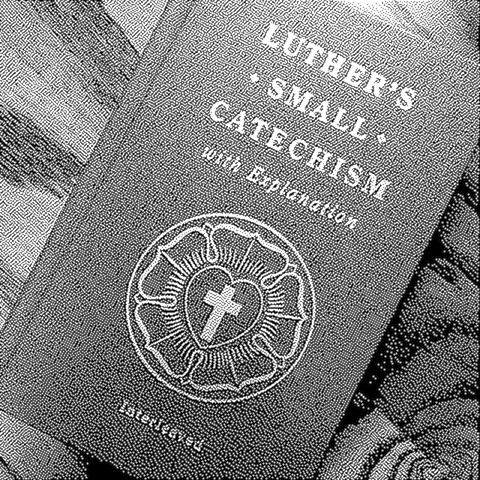 Martin Luther’s Small Catechism – though short and concise – presents a clear window into Luther’s understanding of Christ’s nature and how that nature works itself out in the ordo salutis. Historically, Luther’s writings on the Sacrament of the Bread and Wine followed the path of the Reformation debates on the Mass as a sacrifice and how – or even if – Jesus was present in the Eucharistic elements. Theologically, however, Luther’s views on Sacraments, specifically the Eucharist, can best be understood through his Christology. Martin Luther rejected the Mass as a sacrifice and strongly affirmed the corporeal presence of Christ in the bread and wine of Eucharist. Luther rejected both Catholic and Reformed Eucharistic theologies because of his deeply incarnational Christology. For Luther, because Jesus was fully divine and fully human and because he suffered and died on the cross for humanity’s salvation, the Mass simply could not be a salvific sacrifice and the Eternal Word could not be separated from his final testament of bread and wine.

To Martin Luther the answer to the question cur Deus homo was clear. In the ordo salutis God the Son became human to suffer and die on the cross as a payment for humanity’s debt of sin to God the Father. Paramount to Luther’s understanding of how God the Son could pay this debt, was the unity of the two natures of Christ. The Nicene Creed declares that Jesus is ὁμοούσιον τῷ Πατρί – “of one being” or “consubstantial” with the Father. Affirming with the Church Catholic that Jesus was both fully human and fully divine, Luther could not part from the tradition of the Church. To Luther, any theology that downplayed either the human or divine nature of Christ was a direct affront to his Christology grounded in the incarnation. Prime among the offenders against Luther’s Christology where the theological efforts of his fellow Reformers to reinterpret the dominical Sacraments of baptism and Eucharist.

Early in his Small Catechism – second only to the decalog and an affirmation of God’s providence – is an article affirming Luther’s deeply incarnational Christology. In article two of the Small Catechism, Jesus Christ is affirmed by Luther to be “true God […] and also true man.”1 It is important to Luther’s Christology that Jesus is known to have redeemed humanity through the incarnation and his bodily suffering and death on the cross. How Jesus saved humanity in his body is, for Luther, at least as important as the fact that Jesus accomplished salvation for all on the cross. Luther says that Jesus “purchased and won [humanity] from all sins, from death, and from the power of the devil; not with gold or silver, but with His holy, precious blood and with His innocent suffering and death2 […]” Salvation could not be won without the perfect union of God and humanity in Jesus. In Jesus, God had become permanently united with humanity and this union effected the entirety of the salvation narrative.

On the cross, God suffered and died and that suffering, to Luther, was equally suffered by the divine and human natures of Christ. There could be no separation of the two natures. “Luther worshiped God incarnate, not naked. A naked deity, for him, was of no benefit.”3 For Luther, Jesus can only save humanity from its sinful and fallen state by taking on humanity within his nature. Preaching on John 6:45-7, Luther declared that, “I am determined to know nothing of a Son of God who is not also Mary’s Son who suffered, the God enveloped in humanity who is one Person. I dare not separate the one from the other and say that the humanity is of no use, but only the divinity.”4 Jesus Christ was divine, yes, but he was also fully human. Ignoring or downplaying Jesus’ humanity was to Luther to disregard and blaspheme the work done on the cross for the salvation of all humanity. There could be no cross, no Easter, and thus, no salvation without God taking on and persisting as full humanity alongside his full divinity.

The Small Catechism was very much a summation of the theological work that Luther had been doing in the years prior to its 1529 publication. That These Words of Christ Still Stand Firm5 – hereafter Firm – published in 1527 was a systemic work detailing Luther’s views, nominally, on the Eucharist. Amy Nelson Burnett, however, posits that like the Small Catechism, it too contained a large dose of Luther’s Christology.6 In Firm, Luther makes it clear that God is indeed a Holy Other. All God’s ways cannot be fully known or understood by humanity. What humanity knows of God we know only by “what God has chosen to reveal to us.”7 For Luther, however, the revelation of God was not solely in the form of Scripture – the Word –, but also made manifest in the physical Sacraments of baptism and Eucharist.8 As God revealed himself in God the Son’s incarnation as Jesus of Nazareth, he continued to reveal himself through these “external means.”9 The incarnation and Luther’s understanding of what it meant for the Word to become flesh10 are the root of Luther’s theological statements in the Reformation debates about the Mass and Eucharist.

The capstone of the theological first section of Luther’s Small Catechism is his discussion of the “Sacrament of the Altar.” From the onset Luther defines Eucharist as “the true body and blood” of Jesus.11 Jesus is said to be corporeally “under the bread and wine.”12 The dominical command is clear, too, for Luther. The Eucharist was “instituted by Christ Himself for us Christians to eat and to drink.”13 The question of the Reformation, however, was not what Jesus had said or commanded, but what the words of institution14 – known as the verba in liturgical studies – meant. Specifically, in the debate that divided Luther from many of his compatriots, what did it mean for Jesus to say “this is my body” and, further, the priest to say hoc est corpus meum during the verba of the Mass?

In Luther’s argument against Reformers like Karlstadt, Zwingli, and Oecolampadius he, exemplified in his Small Catechism, goes to Scripture. The gospels of Matthew, Mark, and Luke are all clear to Luther. Jesus told the disciples that the bread he had just blessed and broken was his body. In Luther’s agglomeration from the Synoptic Gospels and Paul’s first letter to the Corinthians he sees the clear translation of τοῦτό ἐστιν τὸ σῶμά μου15 and it’s parallels as Das ist mein Leib – “this is my body.”16 In Luther’s plain and literal understanding of the words of Scripture, there was no wiggle room. Jesus wasn’t pointing to himself rather than the bread – Karlstadt – and is really did mean is not “represents” – Zwingli.17 God’s words are true and trustworthy, so what the Lord said in Scripture must be true. At hoc est corpus meum the bread on the alter becomes the living body of Jesus Christ, “through the Word and the power of the Holy Spirit.”18

Further arguments against Christ’s corporeal presence in the elements of bread and wine came from Zwingli and Oecolampadius’ understanding of what it means for Jesus to be sedet ad déxteram Patris.19 To Luther’s theological adversaries, Jesus could not be both present in the bread and enthroned in heaven next to the Father. It was not logical for Jesus to be in two places at once.20 Given Luther’s strong Christological belief that Jesus was “true God” and “true man” “begotten of the Father from eternity, ”21 it is no surprise that he would strongly reject any notions that limited Jesus to only divine or human properties. Indeed, Jesus had ascended to heaven in his human body. However, if Jesus were fully God and fully human, then there was no reason he would not be omnipresent. For Jesus to not have fully divine attributes would, for Luther, be a rejection of the Christian faith as stated in the Creeds and be an affront to the two natures of Christ required for humanity’s salvation.22

Even conceding Luther’s belief that Christ was corporeally present in the bread and wine of Eucharist, an issue still remained for many Christians of the Reformation. The contemporary understanding of the Mass at the time – persisting into the present era – was that the Mass was a sacrifice. As Jesus was present in the bread and wine his body was again broken on the alter for the sins of the faithful. For Luther, this was an affront to the one-time work of Jesus Christ on the cross. If Jesus had to be sacrificed again and again at each Eucharist then his death on the cross was not sufficient. Again, rooted in his Christology, Luther could not imagine a God’s whose suffering work on the cross was so weak as to need repetition. Further, if attending the sacrifice of the Mass brought forgiveness of sins, then salvation was a work rather than a freely offered gift.23 Pastorally and theologically, Luther could not support the Mass as a sacrifice.24

In The Misuse of the Mass Luther says that “There are not several ways to reconcile God, but one way alone […] The body of Christ is given and his blood is poured out, and thereby God is reconciled.”25 The sacrifice of Jesus Christ given at Calvary is sufficient to reconcile all of humanity to God. But, faith is required. Later in the same section Luther says, “only faith in the given body and the shed blood reconciles.”26 Clearly, it is not the Mass that reconciles the sinner to God, but the sacrifice of Jesus Christ and faith in the same.27

If, to Luther, we are saved sola gratia through our fide in Jesus Christ, what benefit could there be to partaking of Eucharist? In the Small Catechism Luther makes it clear that the benefit of Eucharist is both corporeal and spiritual. Because Jesus says that the body and bread are “given and shed for you for the forgiveness of sins”28 Eucharist has the same effect. “These words” – the verba – and “the bodily eating and drinking” of the consecrated bread and wine ensure that “whoever believes” receives from God “exactly what they say: ‘forgiveness of sins.’”29

Luther’s Christology of the incarnate Christ at one with God, at one with humanity, reconciling both through his body and blood is at the heart of his Eucharistic theology. The Mass cannot be a sacrifice, to Luther, because Jesus has already affected humanity’s salvation on the cross. The Eucharist is an event where God applies again and again the salvific forgiveness “purchased and won”30 by Christ. In the Eucharist, faithful believers are given new life, “for where there is forgiveness of sins, there is also life and salvation.”31

As summarized in his Small Catechism and expounded upon in his more extensive works, Luther holds a very strong view of the dual nature of Christ. Luther’s Christology informs how he views salvation playing out for humankind and extends into how he perceives and experiences the dominical Sacraments of the Church. As an Anglican I can see Luther’s influence in the theology of my own tradition. With Luther we agree that “the Church of Rome hath erred.”32 “The Offering of Christ once made is that perfect redemption […] for all the sins of the whole world […] and there is none other satisfaction for sin, but that alone.’33 With Luther, we affirm that the Mass is not a sacrifice34, but Sacraments are “effectual signs of grace”35 that “strengthen and confirm our Faith”36 in Jesus. Anglicans reject the dogma of Transubstantiation and with Luther take the pastoral stance of affirming what is said in scripture without defining the precise nature of Christ’s presence.

Church of England. The Articles of Religion: Agreed upon by the Archbishops, Bishops, and the whole clergy of the Provinces of Canterbury and York. London, 1562.